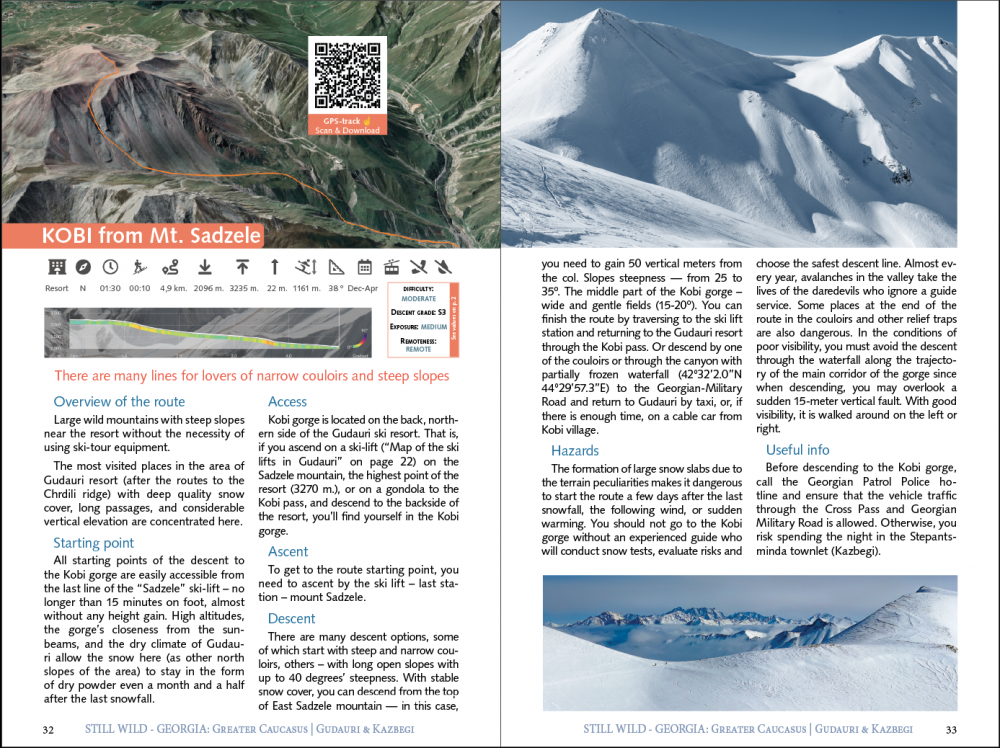 In just a few words
Acclimatization ski-tour route from the Kudebi mountain through the eastern summit of Sadzele to check the equipment and skiing level. On the backside of the resort.
After the Chrdili route, this is the most easily accessible ski-tour route in the resort zone, returning to the resort by ski lift. A short overall duration, smooth height gain, and relative proximity to the resort allow choosing this route during the first days of vacation in Gudauri.
Route description

The route starts with a short descent by the northern slope from the top point of Kudebi mountain, then continues on skins along the trajectory of piste from the Sadzele mountain in the direction of the pass between the top of East Sadzele (3307 m.) and the rocky foot of the spur that goes into the Khado gorge.

After the ascent on the pass, go counterclockwise around East Sadzele, then through the long plateau, skiable the first part. Then – on skins to the col and the descent to the Kobi gorge.

Descent from the pass is in one of the parts of the col – to the north, closer to the Sadzele slope, there is a steeper slope, and you can ascend a little bit to increase the descent line if the snow cover is stable. However, the snow from the next valley side (“Milioni & “Small Alaska”) is often affected by sun and/or wind crust. Therefore, the most conservative option is the descent from the central part of the col. Starting from the middle of the line viewed between the descent starting point and the cable car station, you need to stick to the left so that you can descend to the Kobi 2 ski lift station without losing height. Sometimes, if the traverse speed on the final part of the descent is not enough, to reach the station, you have to cross a shallow ravine and continue the decline to the station along the marked piste.

In poor visibility conditions, without knowing the terrain perfectly and without a track, after rounding the East Sadzele mountain, you can find yourself on the avalanche-dangerous and steep slopes in the Hado gorge, with rock faults.

If the traffic through the Cross pass is allowed, you can continue the descent to the Georgian Military Road through the waterfall (the right photo) and then return to Gudauri by taxi or hitchhike.

Copying any fragment of this guidebook is acceptable with an active link to the source www.gudauri.travel.