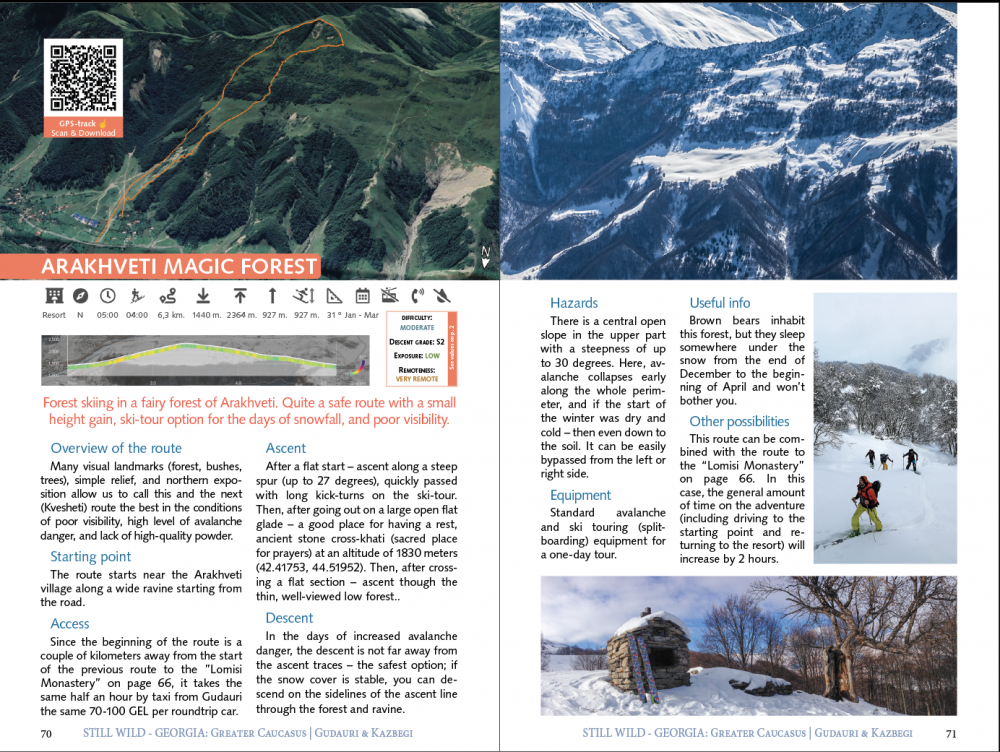 In just a few words
Many visual landmarks (forest, bushes, trees), simple relief, and northern exposition allow us to call this and the next (Kvesheti) route the best in the conditions of poor visibility, high level of avalanche danger, and lack of high-quality powder.
Route description

The route starts near the Arakhveti village along a wide ravine starting from the road.

Since the beginning of the route is a couple of kilometers away from the start of the previous route to the ”Lomisi Monastery” on page 66, it takes the same half an hour by taxi from Gudauri the same 70-100 GEL per roundtrip car.

After a flat start – ascent along a steep spur (up to 27 degrees), quickly passed with long kick-turns on the ski-tour. Then, after going out on a large open flat glade – a good place for having a rest, ancient stone cross-khati (sacred place for prayers) at an altitude of 1830 meters (42.41753, 44.51952). Then, after crossing a flat section – ascent though the thin, well-viewed low forest..

In the days of increased avalanche danger, the descent is not far away from the ascent traces – the safest option; if the snow cover is stable, you can descend on the sidelines of the ascent line through the forest and ravine.

There is a central open slope in the upper part with a steepness of up to 30 degrees. Here, avalanche collapses early along the whole perimeter, and if the start of the winter was dry and cold – then even down to the soil. It can be easily bypassed from the left or right side.