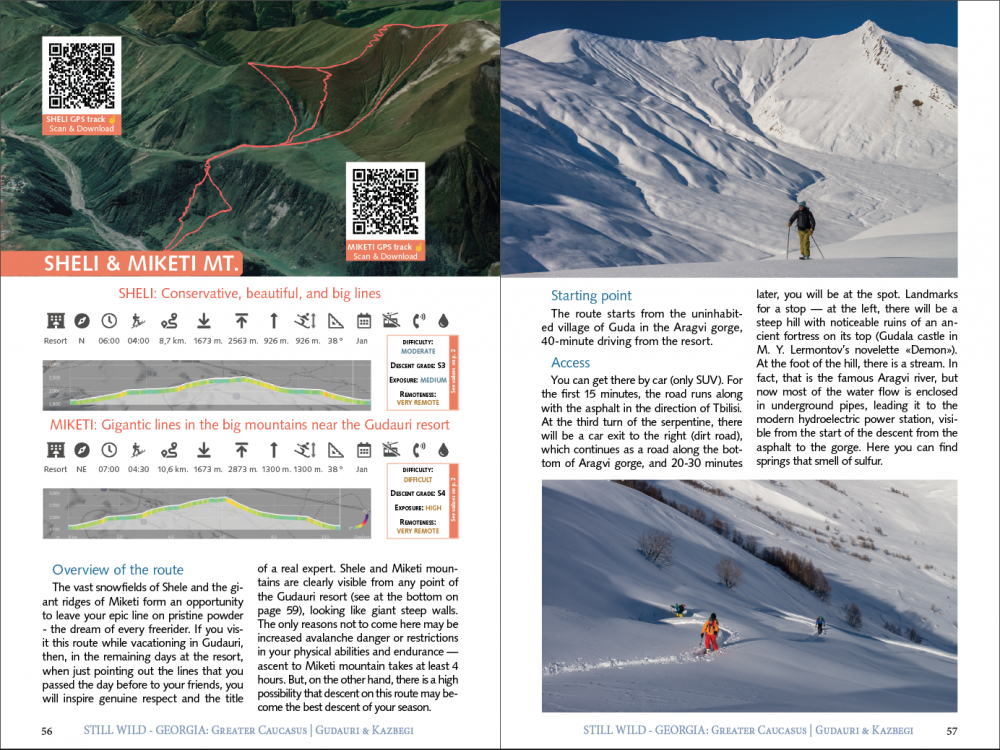 In just a few words
The vast snowfields of Shele and the giant ridges of Miketi form an opportunity to leave your epic line on pristine powder - the dream of every freerider. If you visit this route while vacationing in Gudauri, then, in the remaining days at the resort, when just pointing out the lines that you passed the day before to your friends, you will inspire genuine respect and the title of a real expert. Shele and Miketi mountains are clearly visible from any point of the Gudauri resort (see at the bottom on page 59), looking like giant steep walls. The only reasons not to come here may be increased avalanche danger or restrictions in your physical abilities and endurance — ascent to Miketi mountain takes at least 4 hours. But, on the other hand, there is a high possibility that descent on this route may become the best descent of your season.
Route description

The route starts from the uninhabited village of Guda in the Aragvi gorge, 40-minute driving from the resort.

You can get there by car (only SUV). For the first 15 minutes, the road runs along with the asphalt in the direction of Tbilisi. At the third turn of the serpentine, there will be a car exit to the right (dirt road), which continues as a road along the bottom of Aragvi gorge, and 20-30 minutes later, you will be at the spot. Landmarks for a stop — at the left, there will be a steep hill with noticeable ruins of an ancient fortress on its top (Gudala castle in M. Y. Lermontov’s novelette «Demon»). At the foot of the hill, there is a stream. In fact, that is the famous Aragvi river, but now most of the water flow is enclosed in underground pipes, leading it to the modern hydroelectric power station, visible from the start of the descent from the asphalt to the gorge. Here you can find springs that smell of sulfur.

The route consists of two conventional parts — ascent to the first ridge with access to the hidden valley and access to the top of Shele or Miketi mountains. The relief is open and predictable — slope steepness with an average gradient of 30º, without large terrain traps and sudden drops. 100 meters after the start of the route, you need to cross the stream (there is a bridge here). Then the ascent continues in the saddle direction, visible on the first small ridge. Less than in an hour, you will be on the saddle. From there, continue your way to the right, bypassing the hill on its left side. About 20 minutes later, you will find yourself in a hidden wide valley, not visible from the beginning of the ascent and from Gudauri. Crossing the valley, you will come to the foot of the main slope. Then, along the least steep section through the center, climb the ridge between Shele (left) and Mikheti (right) peaks. On the ridge, depending on the snow cover condition and avalanche danger level and evaluating your energy level, you can decide which top to ascend — the simple left one (Shele mountain) or the more difficult right one (Miketi).

There are no recommendations for the descent – descend where it is safe at the moment – there are various descent lines from any point of your ascent. However, downhill from the central part of Miketi ridge can become one of the best epic descents in your life.

You should go on this route only in good visibility and favorable forecast conditions — in the states of poor visibility, you can quickly lose visual landmarks and get lost. Don’t go on this route during the working days of heli-skiing of Heliksir company on this spot – this is their main spot. Check their schedule beforehand by contacting them at http://heliski.travel/