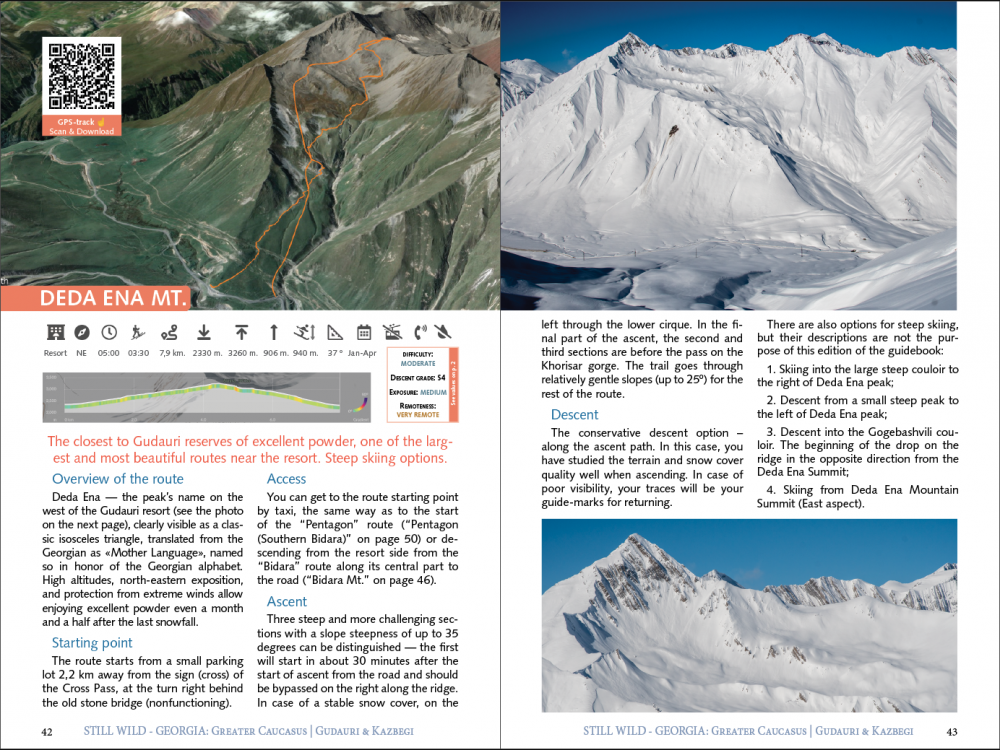 In just a few words
Deda Ena — the peak’s name on the west of the Gudauri resort, clearly visible as a classic isosceles triangle, translated from the Georgian as «Mother Language», named so in honour of the Georgian alphabet. High altitudes, north-eastern exposition, and protection from extreme winds allow enjoying excellent powder even a month after the last snowfall.
Route description

The route starts from a small parking lot 2,2 km away from the sign (cross) of the Cross Pass, at the turn right behind the old stone bridge (nonfunctioning).

You can get to the route starting point by taxi, the same way as to the start of the “Pentagon” route (“Pentagon (Southern Bidara)” on page 50) or descending from the resort side from the “Bidara” route along its central part to the road (“Bidara Mt.” on page 46).

Three steep and more challenging sections with a slope steepness of up to 35 degrees can be distinguished — the first will start in about 30 minutes after the start of ascent from the road and should be bypassed on the right along the ridge. In case of a stable snow cover, on the left through the lower cirque. In the final part of the ascent, the second and third sections are before the pass on the Khorisar gorge. The trail goes through relatively gentle slopes (up to 25º) for the rest of the route.

The conservative descent option – along the ascent path. In this case, you have studied the terrain and snow cover quality well when ascending. In case of poor visibility, your traces will be your guide-marks for returning.

There are also options for steep skiing, but their descriptions are not the purpose of this edition of the guidebook:

1. Skiing into the large steep couloir to the right of Deda Ena peak;
2. Descent from a small steep peak to the left of Deda Ena peak;
3. Descent into the Gogebashvili couloir. The beginning of the drop on the ridge in the opposite direction from the Deda Ena Summit;
4. Skiing from Deda Ena Mountain Summit (East aspect).

You should go on this route only in good visibility and favorable forecast conditions. Without knowing the terrain and visual landmarks, you can find yourself in the avalanche-dangerous spot or rock fault.

Ascent to the peak of Deda Ena (3500 meters) is available only for experienced mountaineers in April and May (in the photo above and on the right), using additional mountain equipment (ice-axe, ski crampons) and safety climbing gear.