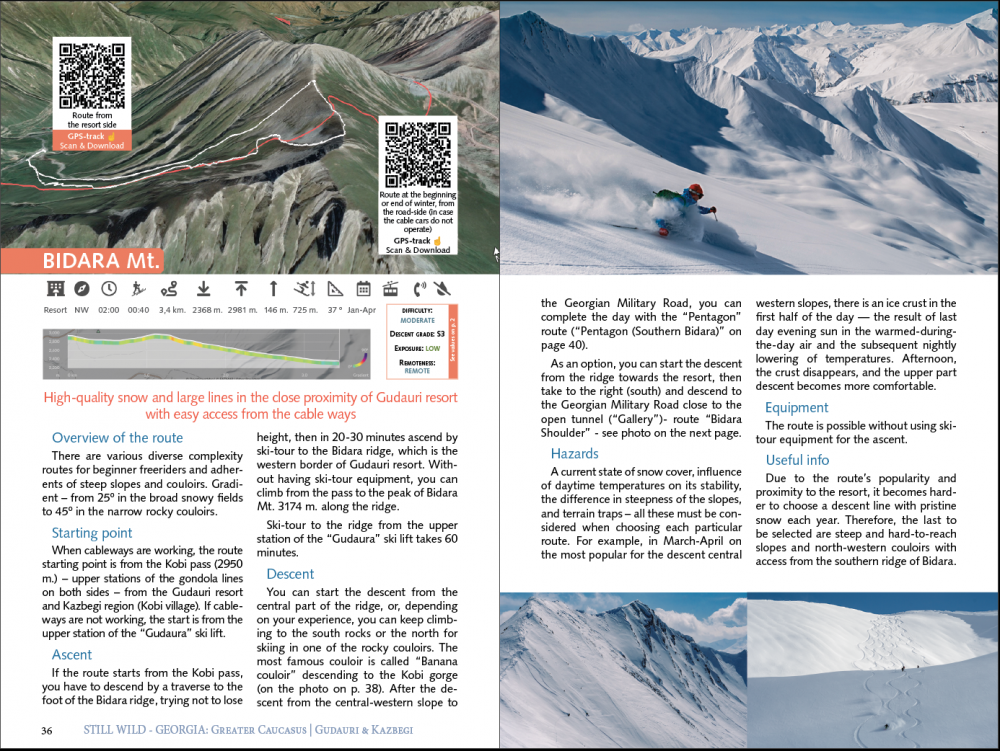 In just a few words
There are various diverse complexity routes for beginner freeriders and adherents of steep slopes and couloirs. Gradient – from 25º in the broad snowy fields to 45º in the narrow rocky couloirs.
Route description

If the route starts from the Kobi pass, you have to descend by a traverse to the foot of the Bidara ridge, trying not to lose height, then ascend by ski-tour in 20-30 minutes to the Bidara ridge, which is the western border of Gudauri resort. Without having ski-tour equipment, you can climb from the pass to the peak of Bidara Mt. 3174 m. along the ridge.

Ski-tour to the ridge from the upper station of the “Gudaura” ski lift takes 60 minutes.

You can start the descent from the central part of the ridge, or, depending on your experience; you can keep climbing to the south rocks or the north for skiing in one of the rocky couloirs. The most famous couloir is called “Banana couloir”, descending to the Kobi gorge (on the photo on p. 38). After descending from the central-western slope to the Georgian Military Road, you can complete the day with the “Pentagon” route.

As an option, you can start the descent from the ridge towards the resort, then take it to the right (south) and descend to the Georgian Military Road close to the open tunnel (“Gallery”)- route “Bidara Shoulder.”

A current state of snow cover, influence of daytime temperatures on its stability, the difference in steepness of the slopes, and terrain traps – all these must be considered when choosing each particular route. For example, in March-April on the most popular for the descent central western slopes, there is an ice crust in the first half of the day — the result of last day evening sun in the warmed-during-the-day air and the subsequent nightly lowering of temperatures. Afternoon, the crust disappears, and the upper part descent becomes more comfortable.

Due to the route’s popularity and proximity to the resort, it becomes harder to choose a descent line with pristine snow each year. Therefore, the last to be selected are steep and hard-to-reach slopes and north-western couloirs with access from the southern ridge of Bidara.