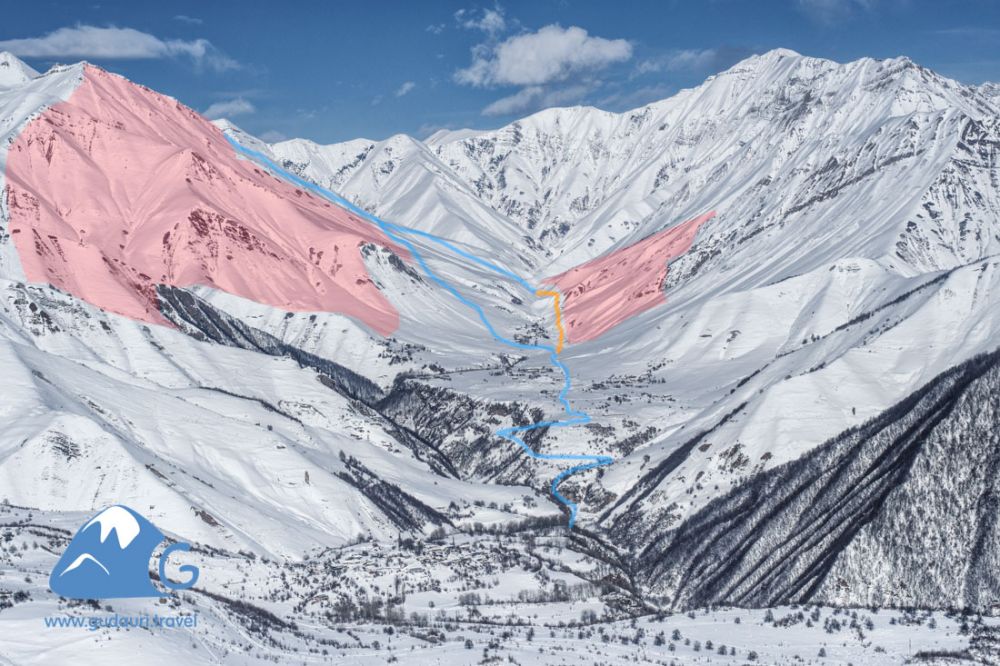 Contact details
Send feedback to the author of the guidebook Oleg Gritskevich
+995 591 340 500 (WhatsApp or Viber)
Send message
Tell a friend
Adventure title
Skiing in Khada Valley, Tskere Village
Highlights
Linear routes, Cultural experience, Day trip
One line summary
Descent begins right from a ski lift. There is a large selection of ideal lines, incredible views, and an atmospheric location – these features make this route the best way to experience this mountainous region in only a few hours.
Alpine difficulty
PD: Slightly difficult (Peu Difficile)
Slope aspect
E (east), SE (southeast)
Route Lenght
9,5 km.
Total duration ⎋
⎋ 04:00 h.
Duration of skinning up ⇡
⇡ 00:00 h.
Ascent ↑
↑ 0 m.
Descent ↓
↓ 1520 m.
Elevation
▼ 1510 m. - ▲ 3030 m.
Descent difficulty
S2 : Wide slopes which are easy to manoeuvre, maybe fairly steep (25°).
Remoteness
Very remote: Little chance of being seen or helped in case of an accident.
Exposure
Low Exposure (E1): Exposure is limited to that of the slope itself. Getting hurt is still likely if the slope is steep and/or the snow is hard.
Overview of the route
The descent to Khada Valley - an inhabited valley deep within the Gudauri Ski Resort surroundings - is a breathtaking adventure. From the beginning of the route via a ski lift, to giant and diverse descent lines, to more than one kilometer of vertical drop, to stunning views and the opportunity to observe life in a remote mountain village, this route is one of the most interesting in the region. However, an increased avalanche danger and a longer return to the resort (in comparison with other routes that also start from a ski lift - Kobi, Bidara) become constraining factors for freeriders.
Route description

Khada valley is located to the east of the Gudauri Ski Resort, immediately after Chrdili Mountain,  the most popular spot for freeriders.

There are several variants of descent, the safest of which begins at the peak of Mount Kudebi (at the end of a ski lift of the same name). Ski descent ends near the village of Tskere, where you will need to travel a few kilometers along a large, flat site to the very bottom of the valley, where a car can reach you in order to bring you back to the resort. The steepness of the slopes is up to 30º.

In wintertime, several families live in Khada Valley, and they are in fact isolated from civilization, as the major part of the only road is covered with snow. This is a one-day route, and you need a couple of hours to return to the resort after the descent.

Every year unlucky tourists find themselves in Khada Valley. These are solo freeriders who accidentally arrive into the valley in conditions of poor visibility while going off-piste on Kudebi Mountain. Sometimes they come to Khada Valley deliberately without realizing the dangers of the chosen terrain and that there are no taxis available in this region to return them to the resort.

Fortunately, despite a great avalanche danger of the eastern and south-eastern slopes, there have been no. fatal accidents. The route is potentially dangerous due to thawing, steep slopes, the presence of terrain levels, the complexity of navigation in conditions of poor visibility, and so-called "terrain traps." If possible, avoid the descent through well-pronounced terrain depressions and ravines – try to choose a descent line along the edges of the slope. Certainly, this route is not recommended for independent passage by riders without corresponding experience.