Some things to know before coming to the Gudauri Ski Resort:

Gudauri is the best ski resort in Georgia

Gudauri is the largest and most modern ski resort in Georgia with a developed infrastructure that includes the biggest level drop in Georgia and unlimited opportunities for freeriding and backcountry skiing (ski-touring). The resort is the highest alpine settlement along the Georgian Military Road, also known by the ancient name “Sky Ravine Road” and is one of the five most elevated permanent settlements in Europe. Housing here is situated at 2000-2750 meters above sea level. Gudauri attracts mountain lovers from around the world...

6 chairlifts (Doppelmayer, Austria) and one basket lift (POMA, France) give guests access to ski runs on the southern slopes with 57 km of certified tracks of different complexity at grades of 2000-3300 m with a level drop of 1300 m. Map of slopes >>>
The cost of a daily ski pass is about USD 12, weekly discounts.

Off-piste skiing (freeriding) is possible both along the tracks under the lifts and on the neighboring western and eastern slopes of the Chrdili and Bidara mountains as well as the northern slopes of Sadzele mountain in the Kobi Ravine. The cost of a daily ski pass is USD 20, with discounted weekly passes available. Ski tour & backcountry itineraries in Gudauri >>>

View of the ski resort of Gudauri, Georgia 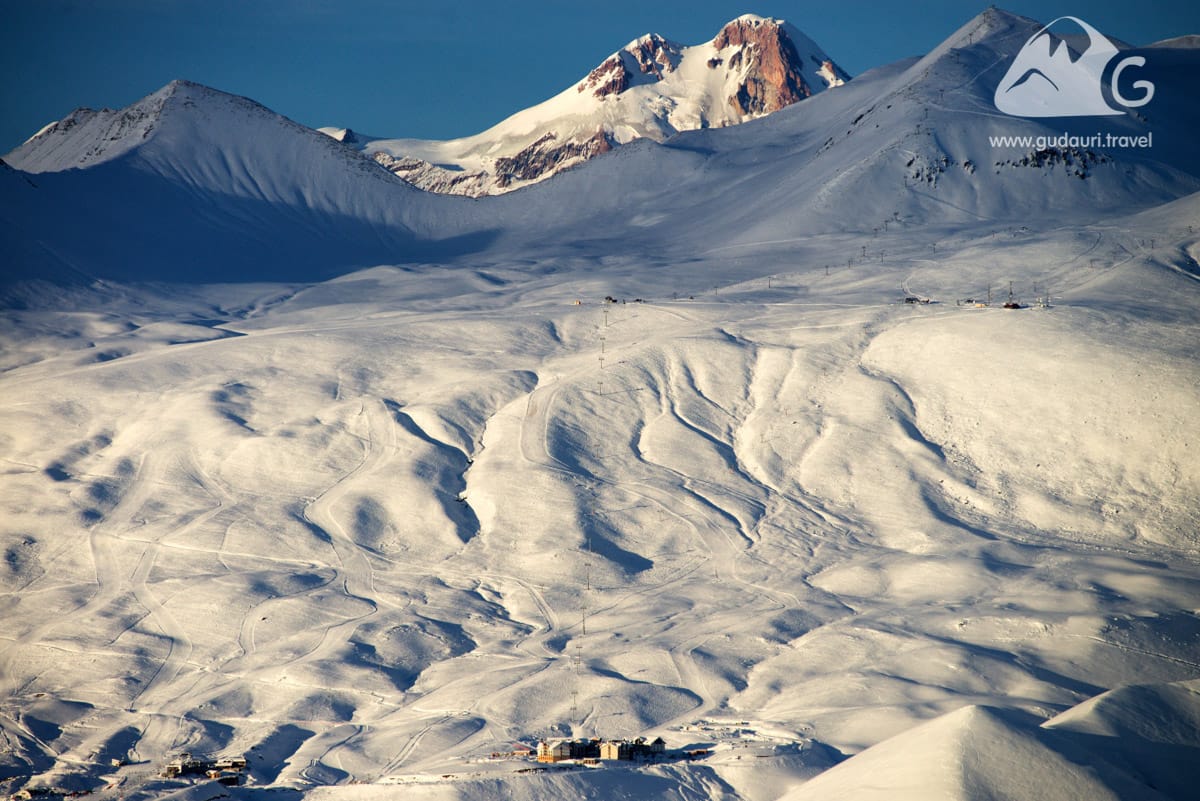 - The high-mountain location of the resort and its dry climate allow for the longtime preservation of snow upon the slopes;
- Vast opportunities for freeriding;
- No queues at lifts (except for holidays and weekends);
- Accommodations within the resort belt;
- It is almost impossible to find a hotel room or an apartment “on arrival” – resort housing is limited, especially during the “high season” (December 27 to January 14 and February 15 to March 10).

Prices for accommodation in Gudauri

The average cost of living for one person with a two-time meal is USD 35-50 per day. From many hotels exit to the ski track directly from the hotel, others are located within walking distance to the ski lift (5-10 minutes walk). Compare prices in hotels in Gudauri >>>

Après-ski and Entertainment in Gudauri

In addition to skiing at the resort, you can ride a snowmobile, paraglider with an instructor, and go on a day trip to Kazbegi or Tbilisi for a day off. Dozens of cafes and restaurants work on the slope. In the evening, you can spend time in the SPA or one of the bars and nightclubs of Gudauri.

Other Ski Resorts in Georgia

Are there any questions before going to Gudauri?

You can find the answer to them here, in the section of useful articles or send your question to email info@gudauri.travel