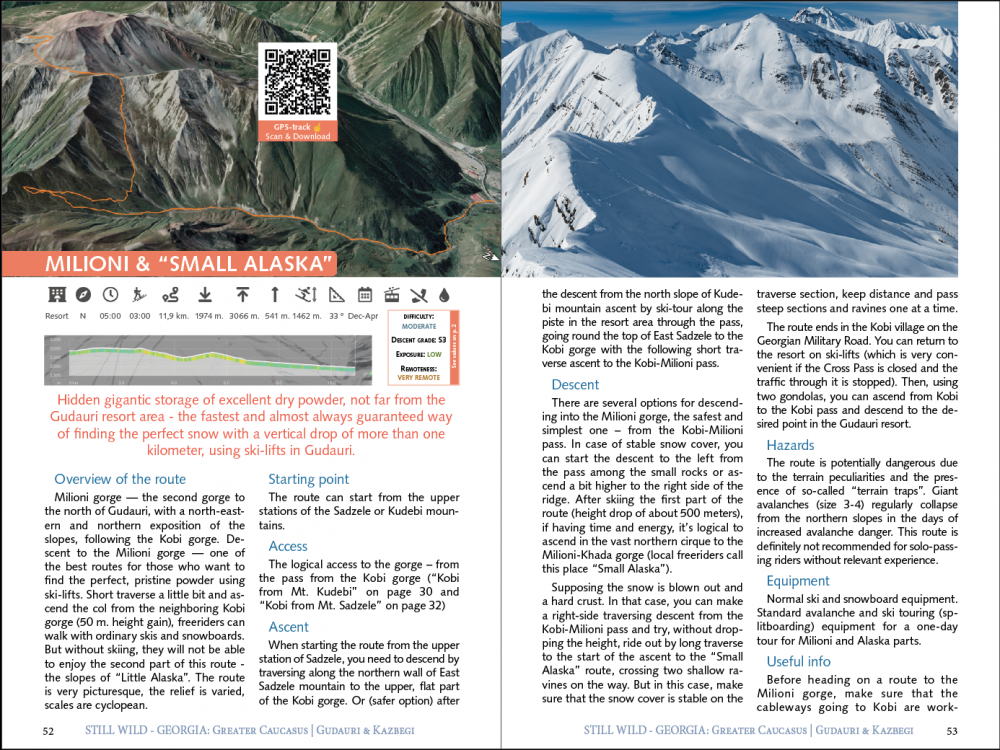 Contact details
Would you like to go on this route with a local mountain guide?
Send a message ⬇︎
Send message
Tell a friend
Adventure title
Milioni & “Small Alaska”
Highlights
Linear routes, Steep Skiing, Day trip
One line summary
Hidden gigantic storage of excellent dry powder, not far from the Gudauri resort area - the fastest and almost always guaranteed way of finding the perfect snow with a vertical drop of more than one kilometre, using ski-lifts in Gudauri.
Alpine difficulty
PD: Slightly difficult (Peu Difficile)
Slope aspect
N (north)
Route Lenght
12 km.
Total duration ⎋
⎋ 05:00 h.
Duration of skinning up ⇡
⇡ 03:00 h.
Ascent ↑
↑ 541 m.
Descent ↓
↓ 1462 m.
Elevation
▼ 1974 m. - ▲ 3066 m.
Descent difficulty
S3 : Slopes up to 35° (equivalent to the steepest runs in ski resorts, on hard snow). Requires good skiing abilities in all snow conditions.
Remoteness
Extremely remote: In the high mountains or remote conditions, all individuals must be completely autonomous in every situation.
Exposure
Low Exposure (E1): Exposure is limited to that of the slope itself. Getting hurt is still likely if the slope is steep and/or the snow is hard.
More routes and information about the region

In just a few words
Milioni gorge — the second gorge to the north of Gudauri, with a north-eastern and northern exposition of the slopes, following the Kobi gorge. Descent to the Milioni gorge — one of the best routes for those who want to find the perfect, pristine powder using ski-lifts. Short traverse a little bit and ascend the col from the neighboring Kobi gorge (50 m. height gain), freeriders can walk with ordinary skis and snowboards. But without skiing, they will not be able to enjoy the second part of this route - the slopes of “Little Alaska”. The route is very picturesque, the relief is varied, scales are cyclopean.
Route description

The route can start from the upper stations of the Sadzele or Kudebi mountains.

When starting the route from the upper station of Sadzele, you need to descend by traversing along the northern wall of East Sadzele mountain to the upper, flat part of the Kobi gorge. Or (safer option) after the descent from the north slope of Kudebi mountain ascent by ski-tour along the piste in the resort area through the pass, going round the top of East Sadzele to the Kobi gorge with the following short traverse ascent to the Kobi-Milioni pass.

There are several options for descending into the Milioni gorge, the safest and simplest one – is from the Kobi-Milioni pass. In case of stable snow cover, you can start the descent to the left from the pass among the small rocks or ascend a bit higher to the right side of the ridge. After skiing the first part of the route (height drop of about 500 meters), if having time and energy, it’s logical to ascend in the vast northern cirque to the Milioni-Khada gorge (local freeriders call this place “Small Alaska”).

Supposing the snow is blown out and a hard crust. In that case, you can make a right-side traversing descent from the Kobi-Milioni pass and try, without dropping the height, ride out by long traverse to the start of the ascent to the “Small Alaska” route, crossing two shallow ravines on the way. But in this case, make sure that the snow cover is stable on the traverse section, keep distance and pass steep sections and ravines one at a time.

The route ends in the Kobi village on the Georgian Military Road. You can return to the resort on ski-lifts (which is very convenient if the Cross Pass is closed and the traffic through it is stopped). Then, using two gondolas, you can ascend from Kobi to the Kobi pass and descend to the desired point in the Gudauri resort.

The route is potentially dangerous due to particular features of the terrain, including a large vertical slope difference and the presence of so-called "terrain traps." Certainly, this route is not recommended for independent passage by riders without corresponding experience.

Before heading on a route to the Milioni gorge, make sure that the cableways going to Kobi are working: check their working hours and try to descend to Kobi with a longer cushion time than a minimal one of 40 minutes. It’s the period needed to walk from the route’s endpoint to the start of the cableway in Kobi.

Returning to the resort by car, you can make a stop a few minutes before Gudauri near the Russia-Georgia Friendship Monument, which has been there since Soviet times, in honor of the 200-year friendship between Georgians and Russians. In addition to this interesting fact, even better are the incredible views from this area on a half-kilometer precipice, a volcanic plateau, and a mountain lake (artificial).