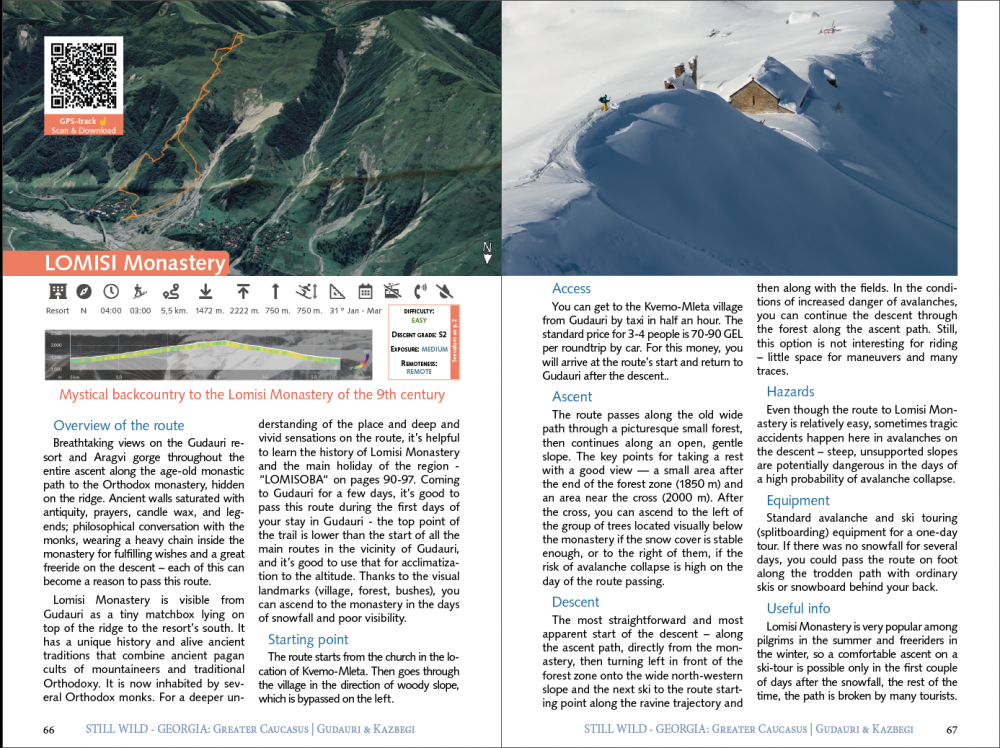 In just a few words
Breathtaking views on the Gudauri resort and Aragvi gorge throughout the entire ascent along the age-old monastic path to the Orthodox monastery, hidden on the ridge. Ancient walls saturated with antiquity, prayers, candle wax, and legends; philosophical conversation with the monks, wearing a heavy chain inside the monastery for fulfilling wishes and a great freeride on the descent – each of this can become a reason to pass this route.
Lomisi Monastery is visible from Gudauri as a tiny matchbox lying on top of the ridge to the resort’s south. It has a unique history and alive ancient traditions that combine ancient pagan cults of mountaineers and traditional Orthodoxy. It is now inhabited by several Orthodox monks. For a deeper understanding of the place and deep and vivid sensations on the route, it’s helpful to learn the history of Lomisi Monastery and the main holiday of the region - “LOMISOBA“ on pages 90-97. Coming to Gudauri for a few days, it’s good to pass this route during the first days of your stay in Gudauri - the top point of the trail is lower than the start of all the main routes in the vicinity of Gudauri, and it’s good to use that for acclimatisation to the altitude. Thanks to the visual landmarks (village, forest, bushes), you can ascend to the monastery in days of snowfall and poor visibility.
Route description

The route starts from the church in the location of Kvemo-Mleta. Then goes through the village in the direction of woody slope, which is bypassed on the left.

You can get to the Kvemo-Mleta village from Gudauri by taxi in half an hour. The standard price for 3-4 people is 70-90 GEL per roundtrip by car. For this money, you will arrive at the route’s start and return to Gudauri after the descent..

The route passes along the old wide path through a picturesque small forest, then continues along an open, gentle slope. The key points for taking a rest with a good view — a small area after the end of the forest zone (1850 m) and an area near the cross (2000 m). After the cross, you can ascend to the left of the group of trees located visually below the monastery if the snow cover is stable enough, or to the right of them, if the risk of avalanche collapse is high on the day of the route passing.

The most straightforward and most apparent start of the descent – along the ascent path, directly from the monastery, then turning left in front of the forest zone onto the wide north-western slope and the next ski to the route starting point along the ravine trajectory and then along with the fields. In the conditions of increased danger of avalanches, you can continue the descent through the forest along the ascent path. Still, this option is not interesting for riding – little space for maneuvers and many traces.

Even though the route to Lomisi Monastery is relatively easy, sometimes tragic accidents happen here in avalanches on the descent – steep, unsupported slopes are potentially dangerous in the days of a high probability of avalanche collapse.

Copying any fragment of this guidebook is acceptable with an active link to the source www.gudauri.travel.

Additional Information
Standard avalanche and ski touring (splitboarding) equipment for a one-day tour. If there was no snowfall for several days, you could pass the route on foot along the trodden path with ordinary skis or snowboard behind your back.