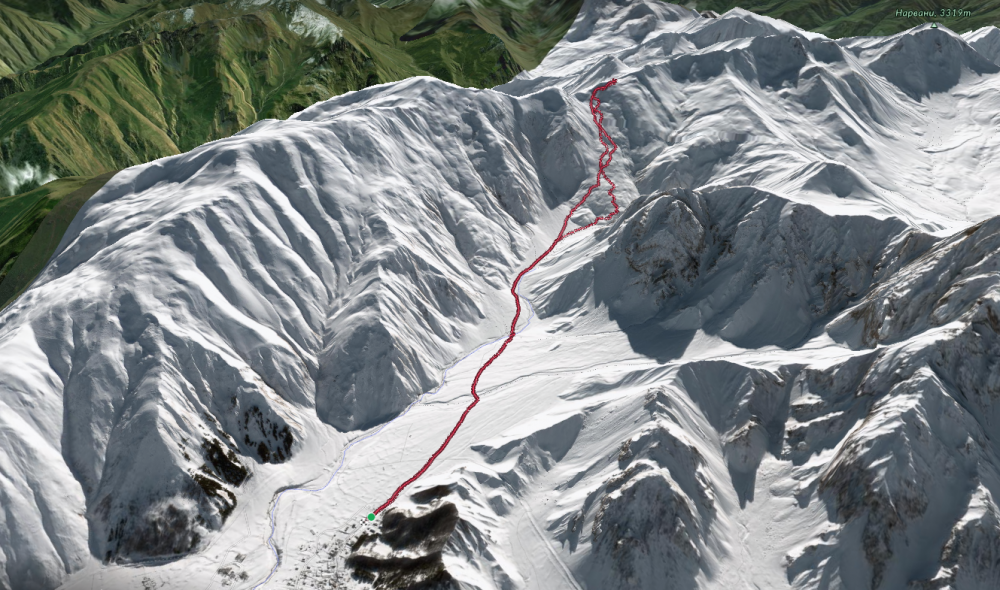 Contact details
Send feedback to the author of the guidebook Oleg Gritskevich
+995 591 340 500 (WhatsApp or Viber)
Send message
Tell a friend
Adventure title
Backcountry skiing in Sioni valley (Tsiteli ridge, Kabarjina Mt.)
Highlights
Loop routes, Day trip
One line summary
Sioni is one of the most spectacular itineraries in the region, characterized by a long approach, excellent snow quality, and a large selection of descent lines in a varied terrain.
Alpine difficulty
PD: Slightly difficult (Peu Difficile)
Slope aspect
N (north)
Route Lenght
13 km.
Total duration ⎋
06:00 h.
Duration of skinning up ⇡
⇡ 03:30 h.
Ascent ↑
↑ 1057 m.
Descent ↓
↓ 1061 m.
Elevation
▼ 1949 m. - ▲ 2996 m.
Descent difficulty
S3 : Slopes up to 35° (equivalent to the steepest runs in ski resorts, on hard snow). Requires good skiing abilities in all snow conditions.
Remoteness
Extremely remote: In the high mountains or remote conditions, all individuals must be completely autonomous in every situation.
Exposure
Low Exposure (E1): Exposure is limited to that of the slope itself. Getting hurt is still likely if the slope is steep and/or the snow is hard.
More routes and information about the region
In just a few words
The Sioni Valley – cold and hidden from direct sunlight for most of the winter - is one of those areas where the snow remains longer than in the whole region and its quality is better than anywhere else at a similar altitude. Until the publication of this guidebook (summer of 2017), the route was rarely visited by freeriders (compared to other routes within Gudauri) due to lack of knowledge about the route, longer access to the beginning of the ascent (35 minutes by car), and the approach to the route (distance – 4 km, ascent – 400 meters, time – 1.5 hrs). But even with a significant increase in the popularity of this route, you can always find beautiful descent lines on untouched snow in a distinctly varied terrain, from snowy fields and giant couloirs with steepness of no more than 27º to steep walls and long couloirs between big rocks.
Route description

The northern exposure of the Sioni Valley and of the slopes along the route is not lit by the sun during the major part of winter. Traversing the route early in the morning can be colder than expected - bring warm gloves and hot tea with you in this case.

Statistics in this region are positive. There have been no accidents related to avalanches or injuries on the terrain. But, taking into account its remoteness from the Gudauri resort, lack of mobile connection on almost the entire route, as well as the high avalanche danger due to the relief, the absence of accidents is likely to be connected to the fact that the route is not well-known.
Heading off to Sioni, you need to have a clear understanding of the nature of snow layers and the degree of stability of snow cover on slopes with a northern exposure before setting off for the route. If you go on a route without a professional guide, make sure that your companions are ready to ride on potentially dangerous mountain terrain. On the eve of taking the Sioni route, review your avalanche equipment working skills and knowledge of rescue operations. This advice is actually useful before going on any freeride route.
Clarify the level of avalanche danger before setting off for the route! Daily updated information on the level of avalanche danger can be found in the Gudauri Travel Bar (www.gudauri.bar).

You can find information regarding the level of avalanche danger in the region, buy maps of the route, join an organized group, or order a professional mountain guide on this route in the Gudauri Travel Bar (www.gudauri.bar).