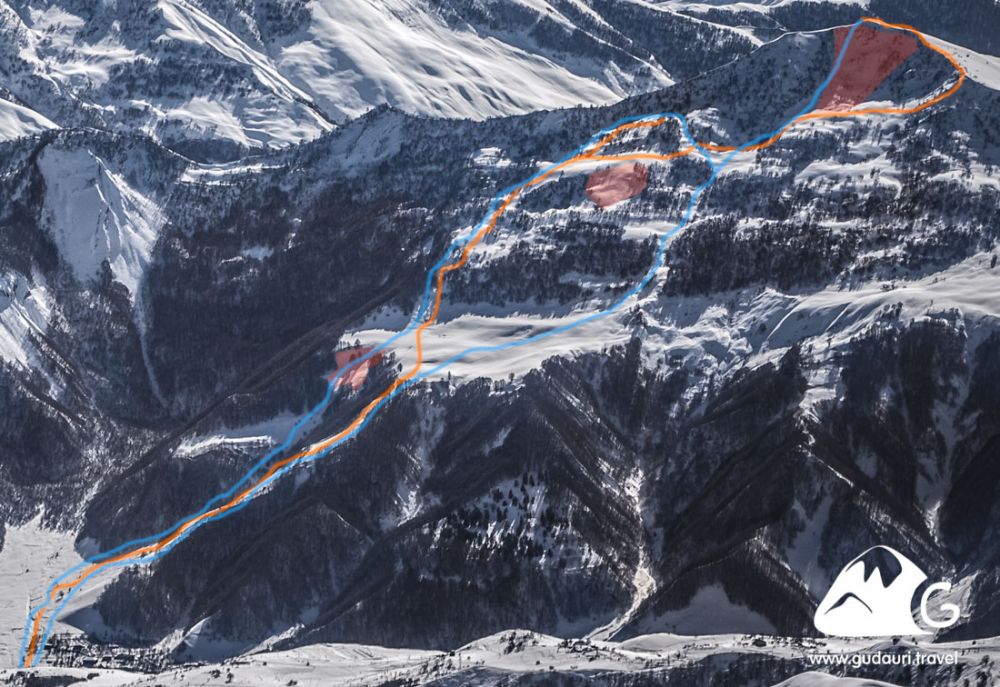 Contact details
Send feedback to the author of the guidebook Oleg Gritskevich
+995 591 340 500 (WhatsApp or Viber)
Send message
Tell a friend
Adventure title
Backcountry to the Fairytale forest Arakhveti, Lomisi ridge.
Highlights
Loop routes, Trees Skiing, Day trip
One line summary
This forest is inhabited by brown bears. In the winter, though, there is a good chance that they are sleeping somewhere under the snow and will not disturb you. For this reason, the route is not recommended to be taken in early December and in April.
Alpine difficulty
F: Easy (Facile)
Slope aspect
N (north)
Route Lenght
3,3 km.
Total duration ⎋
⎋ 5 h.
Duration of skinning up ⇡
⇡ 03:10 h.
Ascent ↑
↑ 750 m.
Descent ↓
↓ 750 m.
Elevation
▼ 1460 m. - ▲ 2210 m.
Descent difficulty
S1 : easy descent which does not require any particular technical abilities such as forest tracks for example.
Remoteness
Very remote: Little chance of being seen or helped in case of an accident.
Exposure
Low Exposure (E1): Exposure is limited to that of the slope itself. Getting hurt is still likely if the slope is steep and/or the snow is hard.
Overview of the route
A lot of visual landmarks (forest, bushes, trees), relative avalanche safety, and northern exposure justify the characterization of this route as the best one to take when visibility conditions are poor (whiteout), there is a high level of avalanche danger, and there is a lack of quality powder. Moreover, this route is remarkable for its views, excellent snow, and virgin forest.
Route description

Despite the fact that the route is pretty easy, it is still rather quiet here. Alternately, a little bit to the west on the same slope, dozens of freeriding tourists visit the Lomisi Monastery daily. Here, there is a high probability that you will be alone, face to face with the wildlife, and you will find untouched snow fields for descent (unless, of course, you meet those who read this guide the day before). However, there is quite a big choice of descent lines. Those who want to combine this route with the one to Lomisi Monastery can do that. In this case, it is optimal to ascend to the monastery following the standard route, then continue with a traverse descent to the east, and a 10-minute exit to the ascent route line to Arakhveti Forest. A combination of these two routes will allow you to get as high as 1 vertical kilometer instead of 750 meters. The total time on the route (taking into account the road to the starting point of the route and the return to the resort) increases from 4 to 6 hours.

Safety statistics for the route are good. So far, there have been no cases of avalanche initiation or involvement in them. Nevertheless, the absence of incidents on this slope should be attributed to the fact that this route is still rarely taken by freeriders, as it is not well-known. Despite the fact that the relief is quite safe here, there are several places where avalanches happen (marked in red on the map).