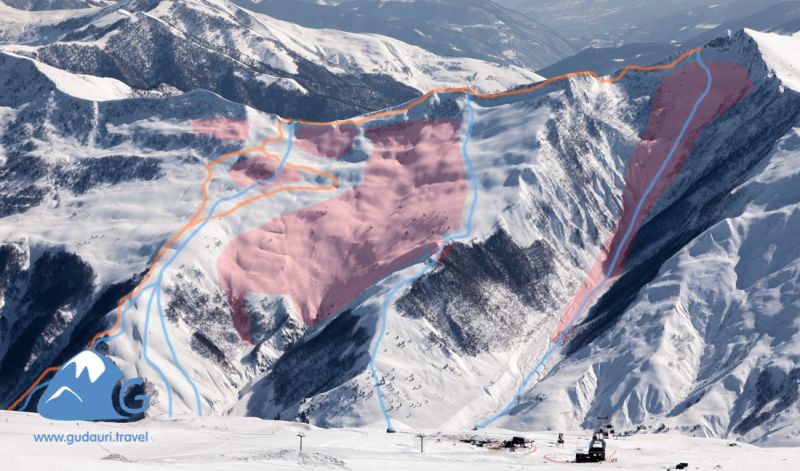 Contact details
Send feedback to the author of the guidebook Oleg Gritskevich
+995 591 340 500 (WhatsApp or Viber)
Send message
Tell a friend
Adventure title
Backcountry to the Lomisi Monastery of the 9th century
Route
Highlights
Loop routes, Trees Skiing, Cultural experience, Day trip
One line summary
You’ll find unforgettable views of the Gudauri Resort from the opposite slope of the Aragvi Gorge. You can drink tea with monks while wearing a chain in the monastery for the fulfillment of your wishes.
Alpine difficulty
F: Easy (Facile)
Slope aspect
N (north), NE (northeast), NW (northwest)
Route Lenght
6,2 km.
Total duration ⎋
⎋ 04:00 h.
Duration of skinning up ⇡
⇡ 02:50 h.
Ascent ↑
↑ 770 m.
Descent ↓
↓ 770 m.
Elevation
▼ 1472 m. - ▲ 2222 m.
Descent difficulty
S1 : easy descent which does not require any particular technical abilities such as forest tracks for example.
Remoteness
Remote: Away from help but easily accessed.
Exposure
Low Exposure (E1): Exposure is limited to that of the slope itself. Getting hurt is still likely if the slope is steep and/or the snow is hard.
Overview of the route
If visiting an ancient Orthodox monastery located far from inhabited areas and civilization, hidden on a mountain range where five monks live all year round sounds like an unforgettable adventure that you would enjoy, then this is the route to take. Not only are the views breathtaking during the ascent, but you will experience a wonderful freeride during the descent. The monastery has a unique history and continues ancient traditions that combine the ancient pagan cults of mountain-dwellers and traditional orthodoxy.
Route description

The route starts from the church in the village of Kvemo-Mleta, then passes through the forest, continuing on an open, less steep slope. The key places to stop and rest are the ridge after the forest ends (1850 m) and the site of the cross (2000 m). The average angle of the slope is 20º. At its steepest point, the angle does not exceed 35°.

The route is very popular with all guides. Because of this, comfortable ski touring is only possible in the first few days after snowfall; the rest of the time, the trail is broken by numerous tourists. You can ascend to the monastery without special equipment, with regular skis or snowboard on your back, with a backpack.

To enjoy the route in solitude and not have to share the ascent with dozens of other tourists, get out early, one hour before dawn.

It is one of the few routes in the region that can be followed in poor visibility conditions, due to the presence of external landmarks.

The monks who live in Lomisi Monastery will be grateful if you bring them water or a wood log from the church at the beginning of the route.

Despite the fact that the route to Lomisi Monastery is quite simple, sometimes accidents happen on descent. Some places are potentially dangerous, especially during days of high avalanche risk. Avalanches on the route are marked in red on the map. Check the level of avalanche danger before setting off for the route!