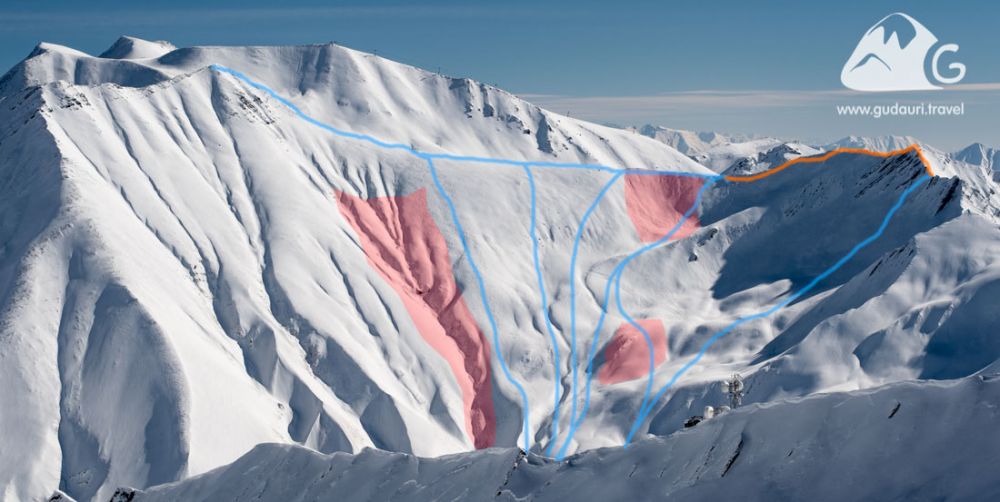 Contact details
Send feedback to the author of the guidebook Oleg Gritskevich
+995 591 340 500 (WhatsApp or Viber)
Send message
Tell a friend
Adventure title
Freeride routes from Mount Bidara
Highlights
Loop routes, Linear routes, Steep Skiing, Ridge route, Day trip
One line summary
Routes on Mount Bidara are very popular with freeriders. With each day after the last snowfall, choosing a descent line from Bidara with untouched snow becomes more and more difficult. The most difficult, steep, and hard-to-reach slopes and northwest couloirs are the last to be ridden.

UPD: Since 2019, the time required to access the Bidara ridge has decreased by half an hour due to the possibility of ascent on a new gondola, going to the Kobi Pass (altitude 2950 m above sea level). Traversing from the Pass, practically without losing altitude, you can move to the ascent start point or ascend to the peak of Bidara Mt. 3174 m by the ridge.
Alpine difficulty
PD: Slightly difficult (Peu Difficile)
Slope aspect
NE (northeast), E (east), SE (southeast), SW (southwest), W (west), NW (northwest)
Route Lenght
1-3 km.
Total duration ⎋
⎋ 02:30 h.
Duration of skinning up ⇡
⇡ 00:40 h.
Ascent ↑
↑ 170 m.
Descent ↓
↓ 1120 m.
Elevation
▼ 2100 m. - ▲ 3220 m.
Descent difficulty
S3 : Slopes up to 35° (equivalent to the steepest runs in ski resorts, on hard snow). Requires good skiing abilities in all snow conditions.
Remoteness
Remote: Away from help but easily accessed.
Exposure
Low Exposure (E1): Exposure is limited to that of the slope itself. Getting hurt is still likely if the slope is steep and/or the snow is hard.
Overview of the route
The immediate proximity of Mount Bidara and its adjacent ridges to the Gudauri Ski Resort, its quick accessibility via ski lifts, and a wide range of freeride routes of various levels of difficulty on various exposures of slopes can make your days unforgettable, whether you’re a novice freerider or a passionate professional riding on steep slopes and couloirs.
Route description

The mountain range of Bidara is located in the western part of the Gudauri Ski Resort. Using ski lifts, you can get very close to the beginning of a short ascent to the top or to one of the ridges. The angles of descent lines vary from 25 to 50 degrees. The relief is the most diverse, from broad, snowy fields to narrow, rocky couloirs.

The region has a large number of combined routes, from those that use ski lifts to skitouring/backcountry routes. It takes 40 minutes to get from the top station of Sadzele lift to the beginning of the simplest route. Before going down to the opposite side of Mount Bidara, make sure that you can see moving traffic on the Cross Pass and on the Georgian Military Road, otherwise you will have to return to Gudauri on foot (10 km).

It is impossible to characterize the safety of this region as a whole. One must take everything into account when choosing each particular route: the state of the snow cover, influence of the southern exposure and time of day on its stability, the different steepness of slopes, and relief traps. For example, in March-April on the most popular western slopes, there is a crust of ice in the first half of the day as a result of the day before’s evening sun in warmed-up air and the subsequent night temperature decrease. After lunch, the crust melts and the descent in the upper parts of the mountain is more comfortable.

Returning by car to the resort, you can make a stop a few minutes before Gudauri near the Russia-Georgia Friendship Monument, which has been there since Soviet times, in honor of the 200-year friendship between Georgians and Russians. In addition to this interesting fact, even better are the incredible views from this area on a half-kilometer precipice, a volcanic plateau, and a mountain lake (artificial).

Additional Information
You can get information about the level of avalanche danger in the region, buy maps of the route, join an organized group or order a professional mountain guide on this route in Gudauri Travel Bar (www.gudauri.bar).