Holiday Lomisoba in the Lomisi monastery - Articles about vacation in Gudauri 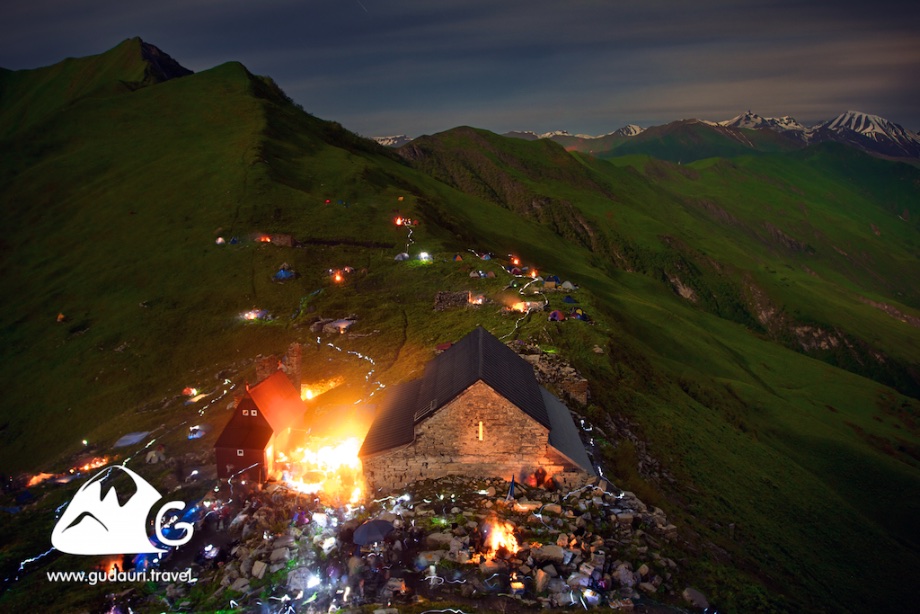 Lomisoba - the main and the most mysterious holiday in a mountain monastery Lomisi near Gudauri, a unique example of the merger of the old traditions of mountaineers with Orthodox Christianity in the mountains of Georgia

Holiday Lomisoba is the worship of the icon of St. George in the ancient Orthodox Church Lomisi (IX century) near the ski resort of Gudauri. With this place are associated many legends. This place many centuries it is a place of power, wonders, and a source of inspiration for Orthodox Christians. History of the name of this place is associated with the nickname Bull - "Loma", which means "lion", which brought the 7000 of captives mtiuls (the inhabitants of the valley of the river Aragvi) from Persia, went up the mountain, where the monastery is located now and then gave up the ghost. Icon of St. George, which was tied to its horns, fell down and remained standing upright. At this point has been founded a monastery, named after the bull - "Lomisi", which is headed by the icon of St. George.

Monastery Lomisi is visible from Gudauri as a tiny matchbox lying on top of the ridge to the south of the resort.

What happens today in the monastery Lomisi and around it?

Today we celebrate Lomisoba - a holiday, come to us from time immemorial, where you can observe a strong link between the ancient pagan cults and Christianity. Within the day, since the night before the holiday, thousands of pilgrims of all ages from all over Georgia and North Ossetia come up to the temple. At night they light their way with lamps and light of mobile phones. The procession is accompanied by chants. Many travelers take to the monastery a sacrificial sheep, the way of which is only in one direction. The hard way is chosen not only by healthy people - seriously ill climb with the help of relatives. Some climb on crutches. Most pilgrims go barefoot on the stony path, in order to strengthen the prayerful mood and suffer great trials in the hope of obtaining forgiveness of sins and God's grace. On this night, there is almost always a bad weather and icy rain (sometimes with hail) - it just increases the spiritual strength of believers. Lomisoba - a whole range of activities in result of which the participants with overflowing sense of belonging to natural cycles and the natural flow of life, tend to keep traditions and to perform rituals to ensure harmony in their relations with the outside world and the heavenly hosts. At dawn near the temple Lomisi and down on the ground near the church in the village of Mleta, occur public offerings - hundreds of sheep, calves and chickens are sacrificed in the interests of families and whole community. The role of the sacred sacrificial space plays a square in front of the church in the village Mleta, at the foot of the same mountain, on a ridge of which is situated Lomisi Monastery. This is a traditional place for the manifestation of religious fervour by flock and ordinary parishioners. The act of killing takes place outdoors during the liturgy. In Lomisi childless ask about procreation, blinds - about recovery of sight, farmers ask for the fertility of land and livestock. And the numerous stories of local people and the inhabitants of the monastery confirm that the place is really miraculous.

View to Aragvi gorge from the Lomisi monastery early in the morning: The first rays of the Sun in Gudauri - view from the monastery Lomisi: In the age of communism, during the Soviet era temple Lomisi was empty, but, thanks to the Burduli family, which are called "dekanozi" - the temple has been preserved and the ancient traditions associated with it - survived. Dekanozi are original "Highlanders-conservatives" who transmit from generation to generation the traditions of their ancestors, which are the features of the early Christian Byzantine times, sometimes older than the age of the Orthodox Church in Georgia (since IV century).

At a reprint the reference to the source www.gudauri.travel is required.

- The petition against the killing of animals at the festival Lomisoba ...

Next article
Are you dreaming about skiing untouched backcountry? Go to Georgia. Not the US state. The country.
Contact: + 995 595 967 500 (WhatsApp). Email: info@gudauri.travel